I think the title says it all – the wheels make a car, but without a Perfect Stance the set-up will never be complete.

I found a great write-up by Alex Zhao. He’s had over 50 wheel set-up’s under he’s Maserati metallic green colored S2000 Honda. He’s car really pops up with the subtile mods, that don’t scream “look at me”. They’re more like OEM+ -style, that you really have to look up to find what’s been modified. It’s all about those hidden secrets of modified fender radius & suspension tricks… 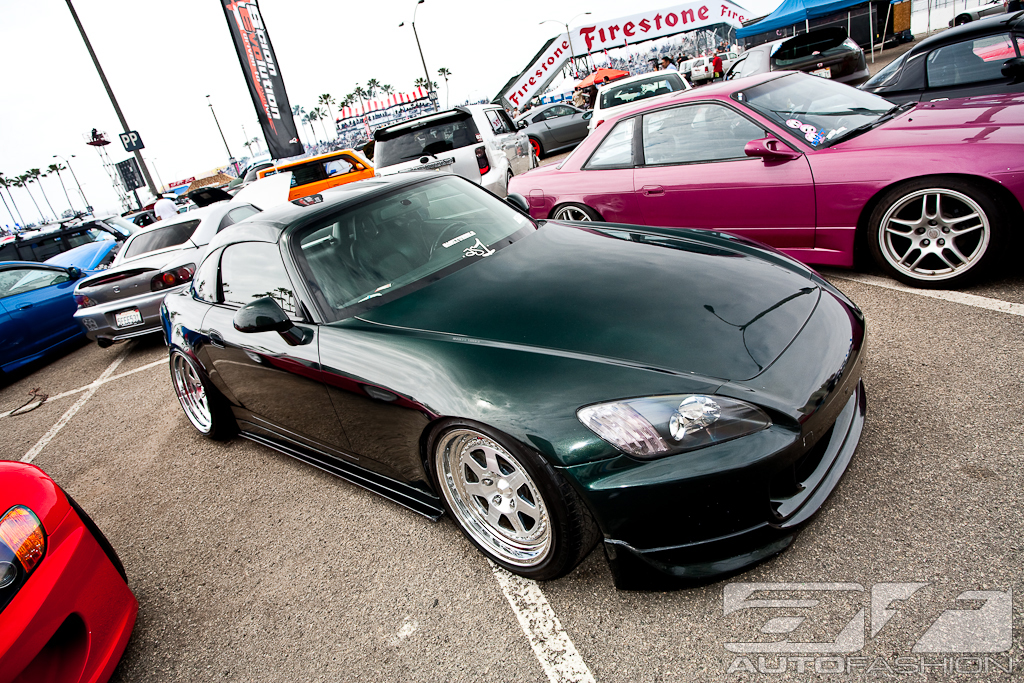 OK. To the actual story – How do you get a Perfect Stance or Advanced Stance. I’ll let the wheel-man him self to explain the view’s of this topic.

Alex: I often make “the morning rounds” before beginning the day’s work, and by that, I mean that I visit a few top blogs – some of which are listed to the side of this post. And on these blogs, I come across photos of many cars. And after viewing said photos, I form opinions, and that is what I will write about.
I think of myself as a well-rounded car builder. I sometimes have odd tastes, but in general, I can see the big picture and appreciate anything as long as it is well done.

Leading off this new section; I’d like to get back to the topic’s seemingly provoking title: The Perfect Stance.

Stance is a really broad subject and the perfect stance is subjective in more ways than most people can understand. Today though, I’m going to look at it from a judge’s perspective. I have never judged a car show personally, however there are many times that I wish I could have that opportunity. As the winner of WekFest’s first ever “Best Stance” award, I feel qualified enough to at least write this, so hear me out.

Because “Stance” includes such a broad number of cars, it might just be the hardest category to judge at a car show. At least 75% of import show cars today have good stance, and that is a conservative estimate. Below, I have compiled a list of elements to consider.

The Basics
Vehicle height and fender gap. If your car is low enough to eliminate the fender gap and the wheels are flush enough (within reason) to fill up the wheel well, then congratulations, you’re officially one step closer to that award than a quarter of your peers.

With that out of the way, let’s examine the basic definition of “good stance” in layman’s terms: A car with good stance must simply look aggressive. Just remember, the car which displays this in the greatest way, wins. This also means that if you go overboard in one way or another, then your chances are slimmer. Now obviously “the bar” and our perceptions grow everyday. A few years ago, having -5 camber was almost unheard of in the US. Now, we literally have people with 4 times that amount driving their cars daily. It all comes down to how you present the entire package. Read on, and I’ll explain.

Advanced Stance
Ugh, this is already going downhill. I am defying every fiber in my body telling me not to use cheesy terminology, but I will push on.

I’ll go ahead and bring this one out early on. If your car is dropped on air suspension, you’re not going to win in my book. No, air suspension is not “cheating” and it’s actually really nice to have on a daily driver if your setup is decent. The problem with air suspension is that it never looks right. When you’re at REAL drive height (and I’m not talking about creeping at 5mph), it’s full blown retardation. Fender gap with unnecessary stretched tires, uneven higher-than-stock ride height in some cases, and unnecessary camber are just some of the side effects. Then when the cups or bags deflate, you get retarded amounts of toe-in on the rear suspension, and toe-out on the front suspension. Trust me, I have been there and done that. With 4 wheels pointing in 4 different directions, the car looks crippled. Often times, the front will slam lower than the rear, or vice versa and you’re left with a front bumper that’s on the ground and the rear pointing skyward (IE: MK5 VW Golf GTI).

Are you on coilovers with high spring rates? If so, excellent. Do you have liberal amounts of negative camber? If so, even better. Does the camber match from front to rear? This is very important as I find it to be attention to detail. A lot of cars these days (especially FWD macpherson setups, for some reason) tend to run upwards of -10 degrees of negative camber and then forget about the front. This is one setup that can make your car look broken and unbalanced. Front camber must be at least half of rear camber. On the contrary, if you have excessive negative camber in front with very little in the rear, this doesn’t look all that bad. Lots of drift cars utilize this setup for maximum contact patch all around. This brings me onto the old phrase, “form follows function”. This is true and applies in every sense. Does your car drive how it sits? With air suspension, the typical answer is that it does not. Also, if you spun your coilovers down at the show, then the case is the same. Do your wheels or tires rub on the fenders. A little rub is acceptable, but if it causes damage to your fenders and/or chunks up and shaves down the tires, then you have poor fitment, period. Consider that another round of disqualifications.

The Body
In short, how well are you framing the wheels? Since there are so many cars with great fitment at a typical show, it’s necessary to be picky and eliminate all cars until you’re left with one. After all, we’re looking to award the car with The Best Stance. This means that it must embody that word in every way, shape, and form. If your fenders and quarter panels are not PRISTINE, then kiss your chances goodbye. That means a lot, right there. How can you have fenders in good condition while being flush at the same time? This of course means that custom bodywork must be done. Whether it’s a small pull being smoothed out or a full on widebody, the fenders must be repainted. The fenders must also line up with the bumpers. If you flare the quarter panel, then you’re fully expected to flare the rear bumper to match. Getting back to framing the wheels; are the fenders radiused? Are you running a proportionate wheel size compared to the size of your car? If you go wide, you must go up as well. By enlarging the quarter panel, you are effectively dwarfing the size of the wheels. The style of flare must be functional. Let me explain. If you use a fender roller and keep pulling outwards, it will eventually start pushing the fender up and you get a cute little flare that covers the tire, but limits vertical clearance. So even if you can roll straight without rubbing, the moment you hit a bump in the road, you’re going to rub, and that my friends, is not functional.

And finally, having aftermarket aero is a great bonus. Part of stance is how mean the car looks head on, so headlights and front bumper definitely play a roll. That is one thing that a lot of people don’t consider.

The Wheels
Simply put, how baller are your wheels? First off, if you’re on replicas, you shouldn’t even be showing. A 3-piece wheel shines here, literally and figuratively. Multipiece wheels give you a multitude of things to customize. You can having massive width, you can control lip sizing, lip style (stepped or reverse), lip finishing, face finishing, hardware finishing, and nail the offset perfectly without the aid of spacers. Wider wheels are better, and the tires should be stretched to a certain degree for clearance. Are the wheels rare/expensive? Is the finishing custom? Are your tires matching and of decent quality? “Stance” can be a quite expensive detail on a car so people often cheap out with ugly all-season tires. There is nothing wrong with that, it’s just not as a good as it can be. I have been guilty of this. At the very least, the tires should be facing the right way, should be rolling the right way, and should have good tread remaining. 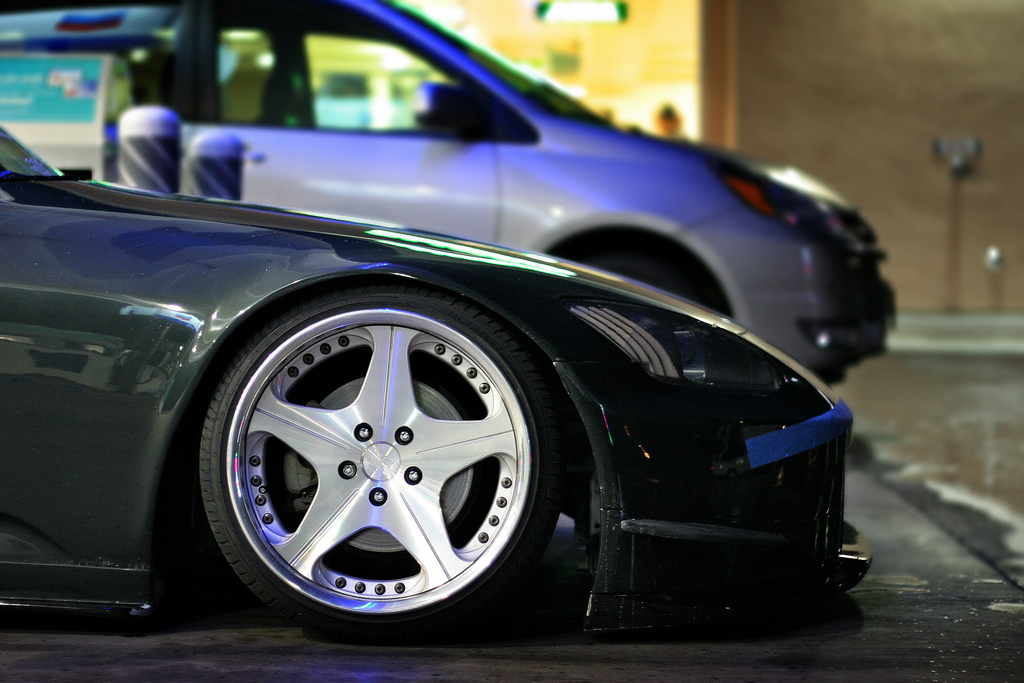 Everything is better in moderation
If a setup is already flush, why add spacers and more negative camber? Why do people camber it until their wheels are no longer flush? I have seen tires stretched so far that inner barrel is revealed on both sides. I am guilty of this, but it is not necessary unless one wanted extreme poke, in which case they wouldn’t win anyways.

The Perfect Stance
So what constitutes the perfect stance? Before I answer that, I just want to say that if it were up to me, I would not have won that award at Wekfest. 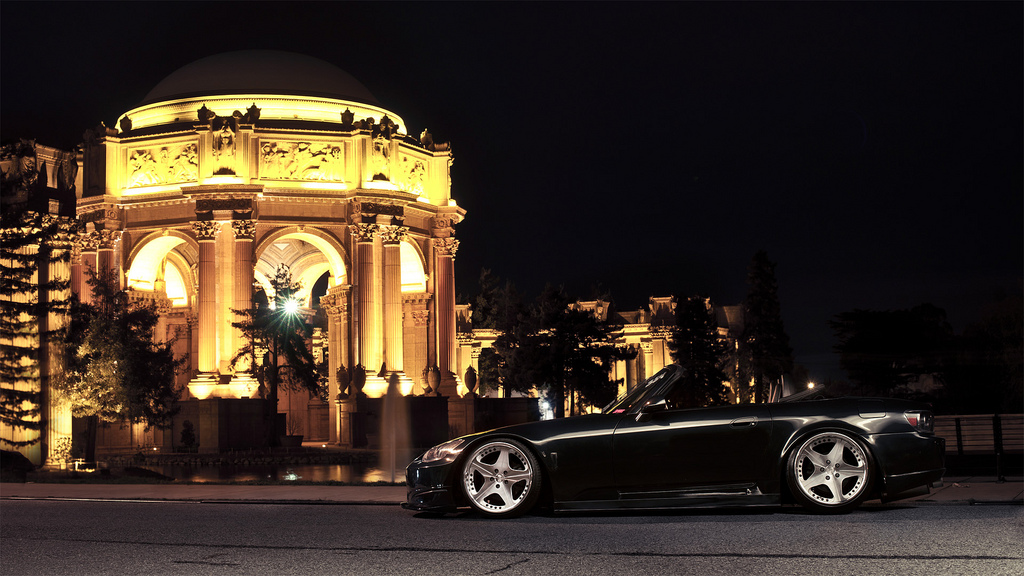 The perfect stance must be awarded to a car that looks *good* even if it had poor stance. In other words, a Daewoo Nubira cannot win, no matter what. The car that I am picturing has a CLEAN custom metal widebody, similar to the one done on my S2000. The aggressive aftermarket bumpers will also be modified to line up. The car is on custom revalved coilovers with high spring rates and decent shock travel (other suspension mods must be in place to ensure this). The car has tubbed inner fenders and it does not rub fender under any driving circumstance, including full-lock turns. It is low to the point where the frame will hit reflectors on the freeway, but the suspension is stiff enough to keep the bumper from excessively scraping. Even being this low with oversized wheels, the car is not tucking rim, which takes away from the beauty and shape of a round wheel. Unlike my S2000, this car has it’s fenders built around one specific set of wheels. From 5 feet away and further, it looks amazingly clean and flush. Upon closer inspection, you’ll find that you can fit a finger or two between the fender and tire. This is because the wheel IS flush with the paper thin fender, but the tire stretch (which is subtle) gives it the necessary clearance to prevent any chance of rub. The car has a little bit more than -5 degrees of negative camber all around, but it never looks excessive. It is sporting high quality wheels with a big brake kit visble behind the face.

Happily, there is a car out there that just about fits the bill, and it is none other than this white Acura TL which debuted at this year’s WekFest: SF show. It wasn’t 100% complete at that show, however it is seen here at the rainy Autofashion VIP meet in San Diego. The owner drove it all the way down from San Jose. 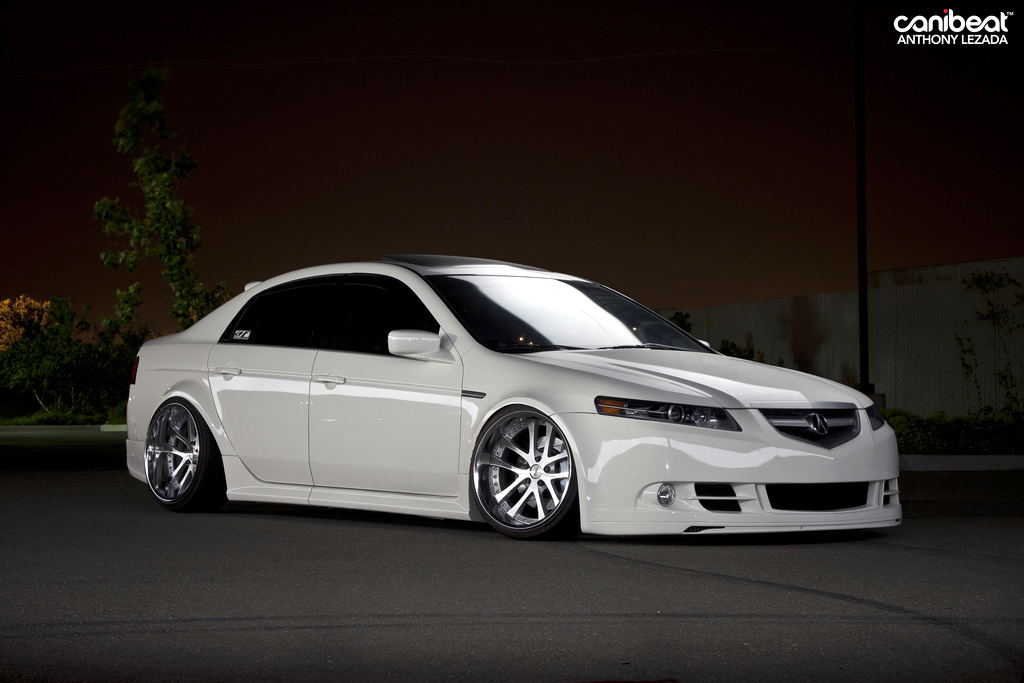 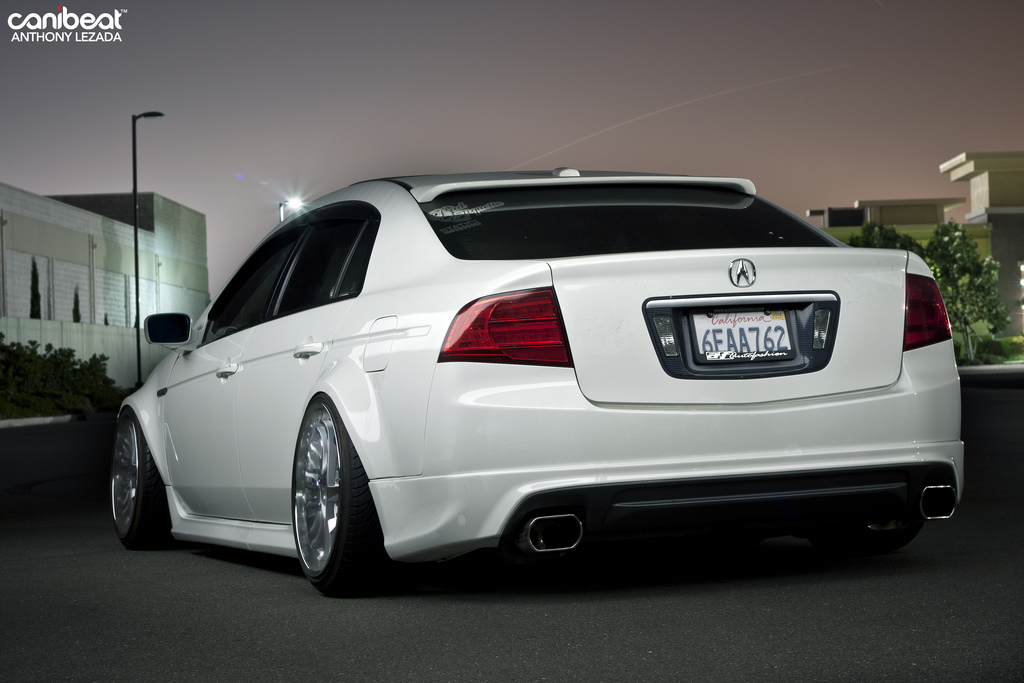 If you liked the featured story, go peep out Alex’s Blog for more “Stance” related wheel storys. Now go out there step up you wheel game!