Friday started by drifting qualification runs. My team mates at Team Falken had done a great job getting the RX-7 running. The Nissan powered and Holset boosted devil had it’s first dyno run just night before the event.

The cars engine was just been driven in and getting some settings & set-ups done by Mr. Valtonen from Valtonen Motorsport. He’s the man behind this build and the driver of the car as well. Everything went pretty well considering that this car had never been driven since the build.

By the end of friday, Nikke from Team Falken was on the 1st place. Ossi was on the 5th place. So it was looking good for the team.

Saturday opened up really dark, but luckily it didn’t rain all day.
Nikke was pushing really good till he did a little mistake and spun the car = 0 points. He lost at the bronze battle and finished at the 4th place.

Ossi on the other hand had really good pace, until he broke the drive shafts end.

It was the 3rd set for the weekend and the team didn’t have any more spares.
So, Nikke lent he’s car to Ossi, witch ended in good results.

Ossi won at the finals after really tight “One-more-time” -run and Leffe Hausselman from Åland came 2nd. Marko Hyvönen who had technical problems and got he’s team mates car for the finals finished 3rd place.
What a birth day gift to Ossi who turned 30 at saturday, Congrats mate!

The X-Treme Festival also had a car show – The Nordic Tuner Awards.
My car ended in the Top 10 of the show. It was nice surprise. The Sweds had the best cars on the show IMO.

The Evos were super sick. 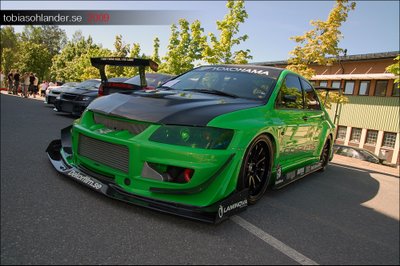 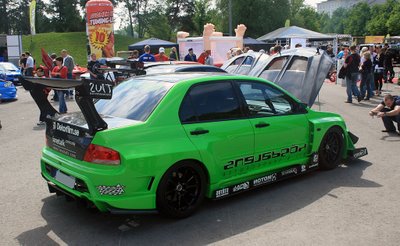 The event’s own website should have some pics soon as well.