So, we decided about 2 months a go to take a part in this years HTS car show. We didn’t have any cars ready and decided to built two completely different styled cars for the show. One with VIP-styling cues and the other with some kind of a “attack” theme or something that would be different from the normal Subaru’s rally/shooting star -theme … 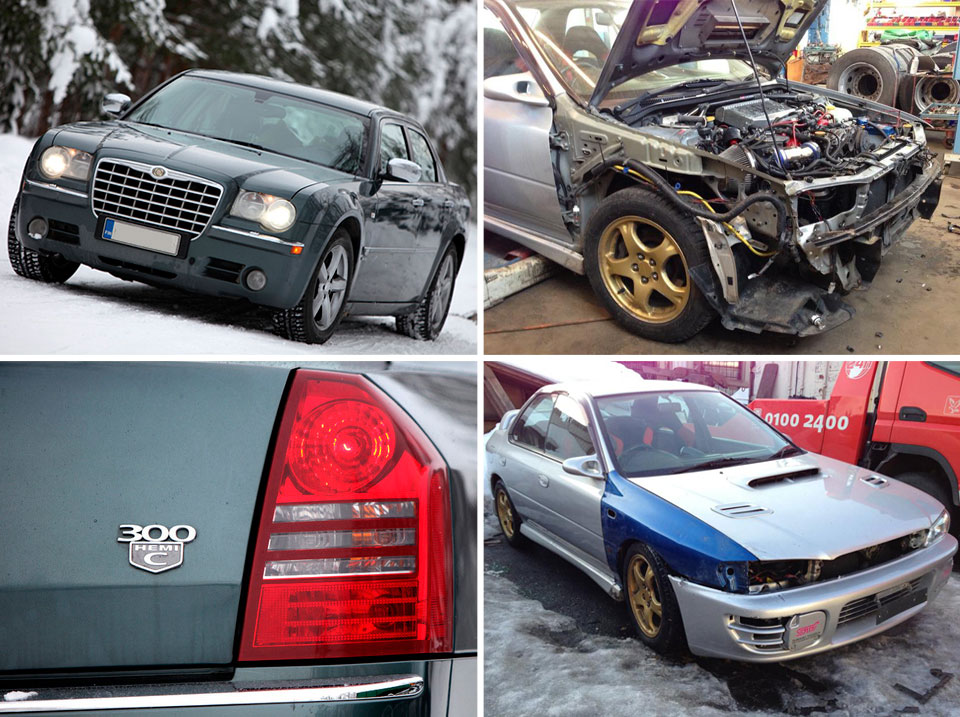 We hit the plans on the table and got busy. We managed to built both cars in a month or so.

The Hemi got it’s exhaust done, a custom stainless straight through pipes to get that V8 roar, KW coil-overs, 22″ wheels, custom painted headlights and front grille. A front splitter and one off rear lip – that we made. The tinted windows ad privacy. 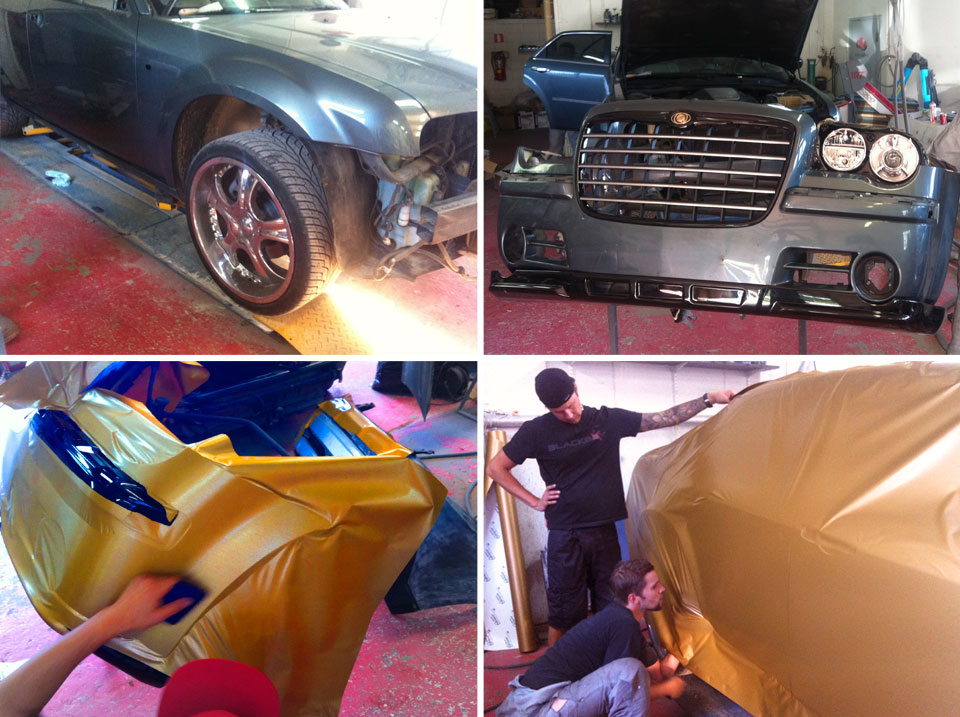 We wanted to keep the 300C’s simple lines and just wanted to pop them up a bit. We choose to wrap it in 3M’s latest 1080 series Brushed Gold.  This stuff really gives it’s superior shine we were after. 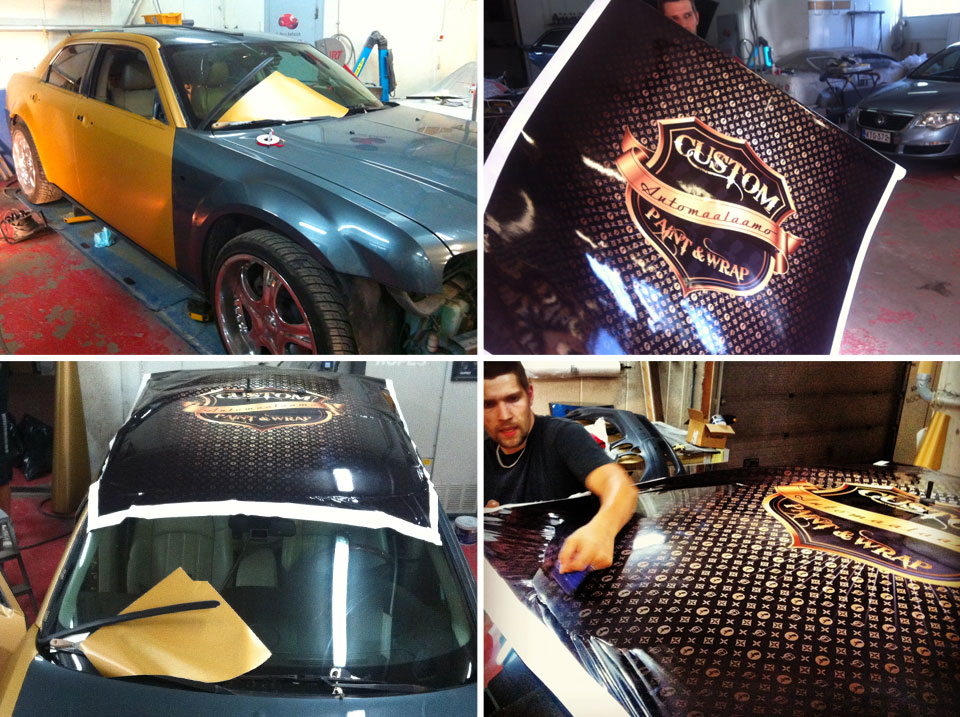 The roof got wrapped in Louis Vuitton -themed Custom Paint logo-pattern/gradient. It was printed/laminated to 3M’s premium wrap. 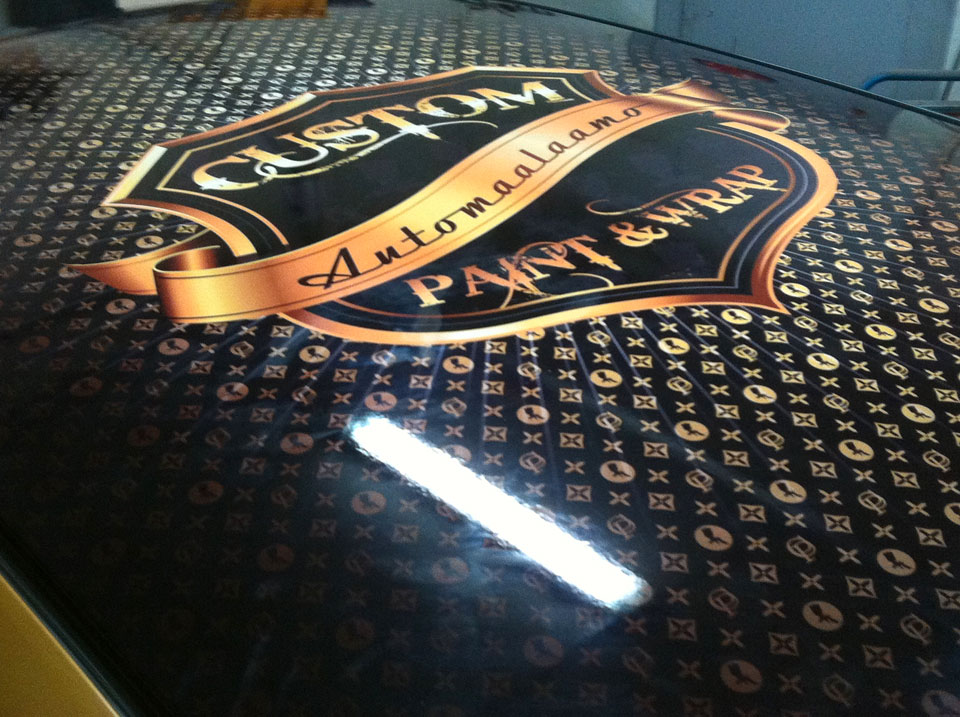 The rear lights got the LaminX & Gold treatment as well. We added small VIP-style metallic-black stripes on the sides and the car was done – in 9 days! 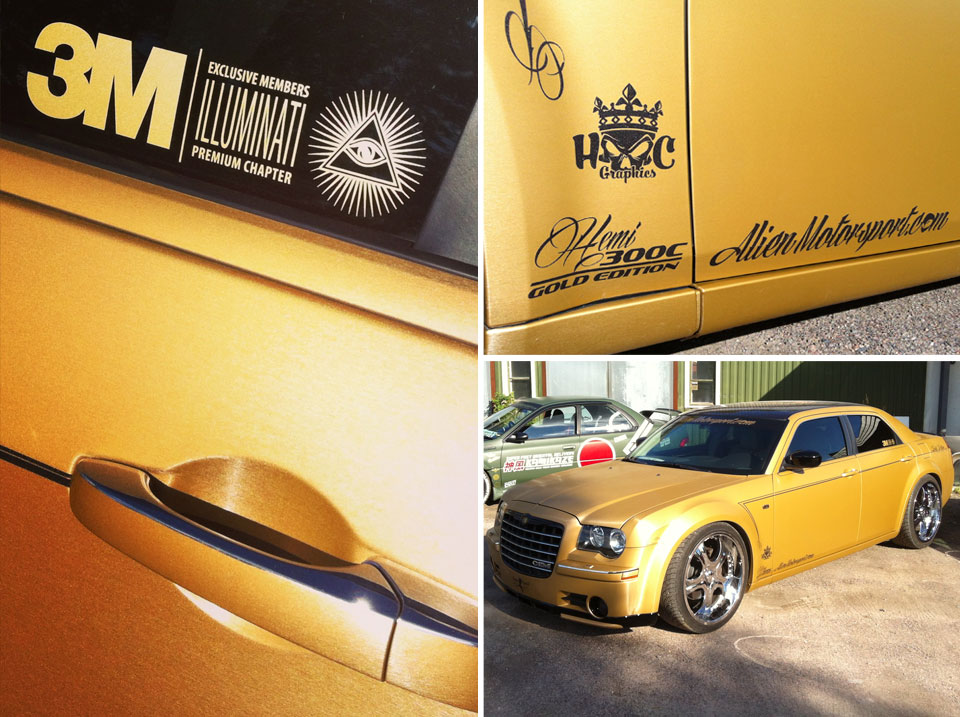 Now to the bit bigger build – the Wasabi Warrior Subaru.

Juhis (the owner) had been looking for good fender flares for a while, that would suite the Subaru’s classic lines. We tried some Datsun Z-style fender flares, but they didn’t really fit. So, we decided to make them ourselves. We got the perfect place & help for the manufacturing these bits, Mr. Late @ SCD was the helping hand. We decided to built them properly. First step was to mold them in to the car to see what look we were after. The Race/Track-style with open rear arch got most votes.

We took molds out of both sides. Then manufactured final molds for later “small production” use. 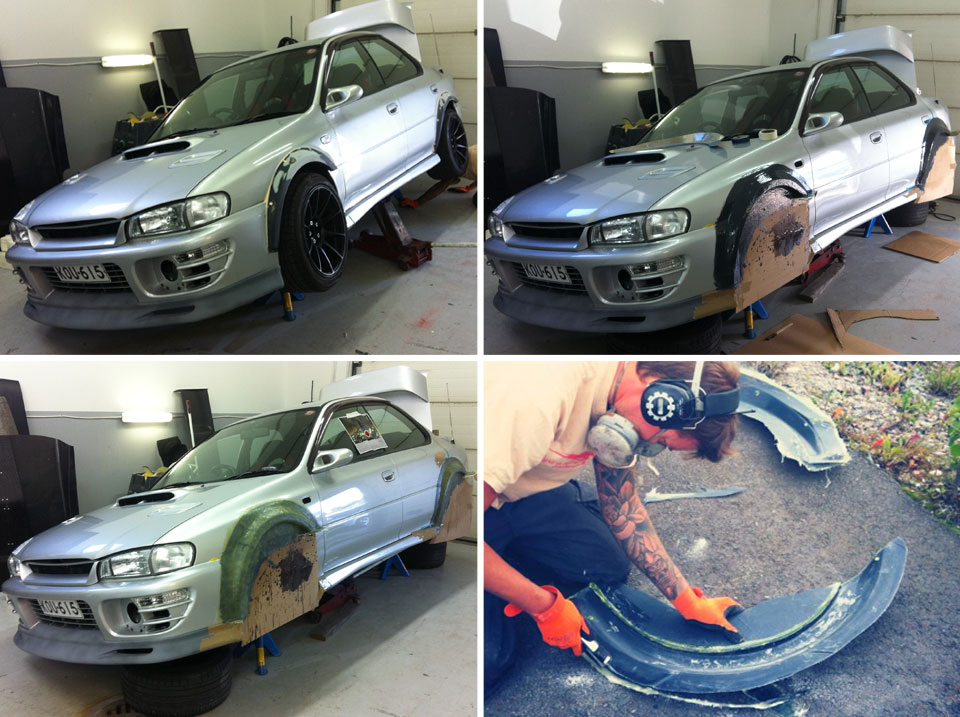 Once the super light final parts were out of molds, we took the task to roll/cut the front and rear arches. 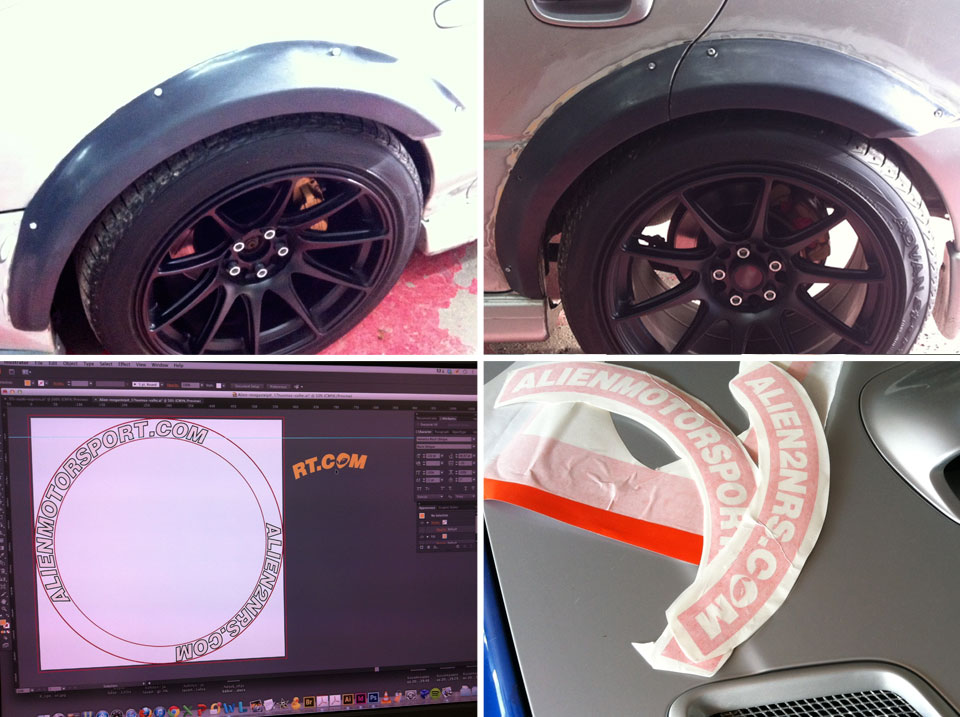 To finish of the race theme we decided to paint our car club’s logos on the wheels. Oh, and if you’re wondering why it looks so wide, the wheels are ET25 front & ET18 rear 🙂 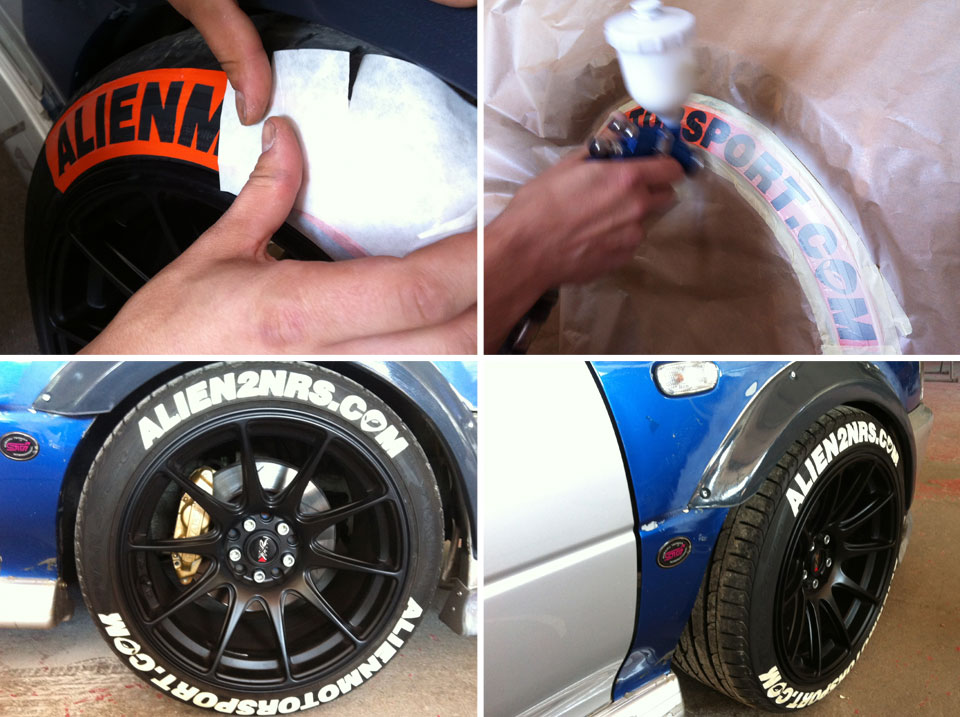 Before painting the car… (yes, it got painted in the repaired sections, like the front/rear arches, hood & front bumper – remember the car was a find from Salvaged Vehicle Center, like I said earlier) we fitted all the flaire’s and drilled the thread rivets to the arches and rear door. 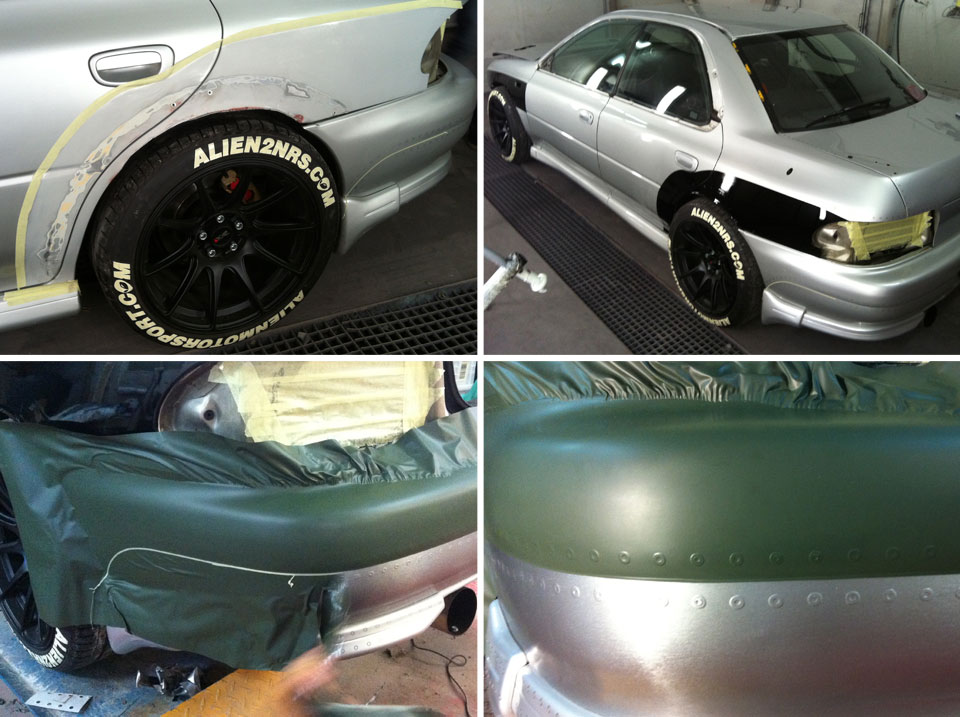 Now that that was done Juhis adjusted the HKS coil-overs and installed a new exhaust downpipe & front spoiler lip. The rest of the car was left alone, as it already had alot of aftermarket goodies form Apexi ECU, ZeroSports intake to Defi meters. The GReddy & Cusco suspension/handling aid’s take care of the stable ride and the HKS exhaust gives a nice note on the higher revs… The car also had a just run in fully rebuilt engine.

Now to the theme… 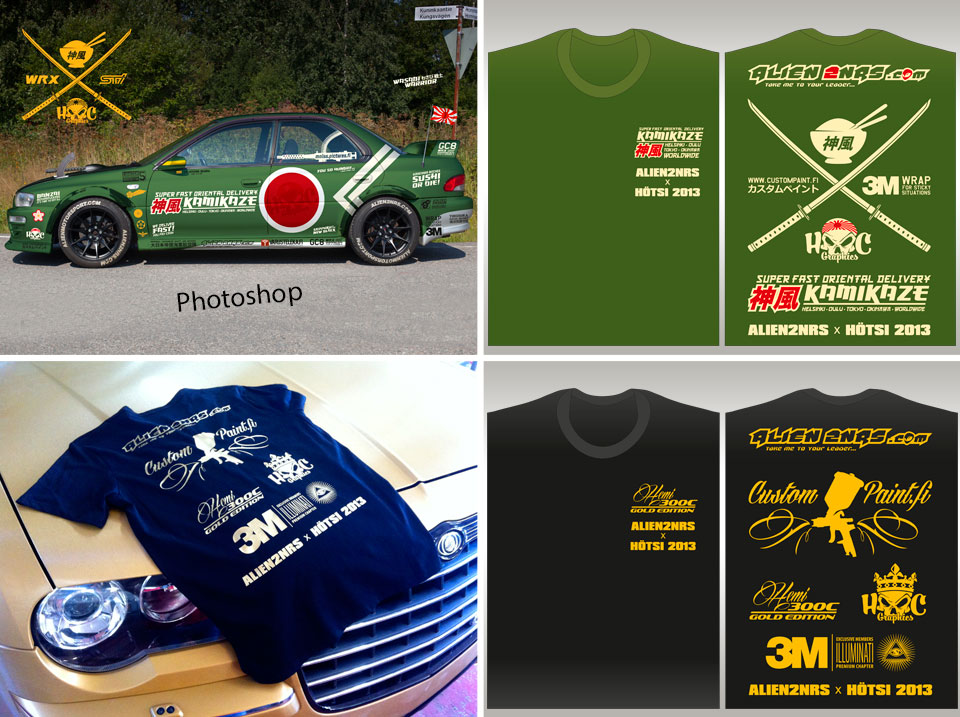 … I was given “free hands” to come up with some kind of a theme. The car had a good fighter style feel, so I continued with that gut feeling and came up with this Japanese Kamikaze fighter / Oriental Delivery car mix. I wanted to take precise details in some parts, like the plane’s colors & pilots background. I did a week of research and draw everything together – I showed my layouts to Juhis… (I was nervous as this is kind of a In Your Face -theme). – First words were: Ooh, green… well, green it is – we will go with that! (this is hes daily driver).

In my research I came up with this man: Kiyoshi Ogawa – a Japanese Naval Aviator, who flew Kamikaze fighter plane in WWII, destroying USS Bunker Hill aircraft carrier.

I wanted kind of tribute this crazy hero, but with a little twist, nothing to serious. So I added a “Delivery Car” theme in the mix. We were going from Helsinki to Oulu (Tokyo to Okinawa) and we were going to deliver something that wasn’t done before, well not least in this way – A crazy ass attack fighter car delivering the ill theme to everyone’s plate! 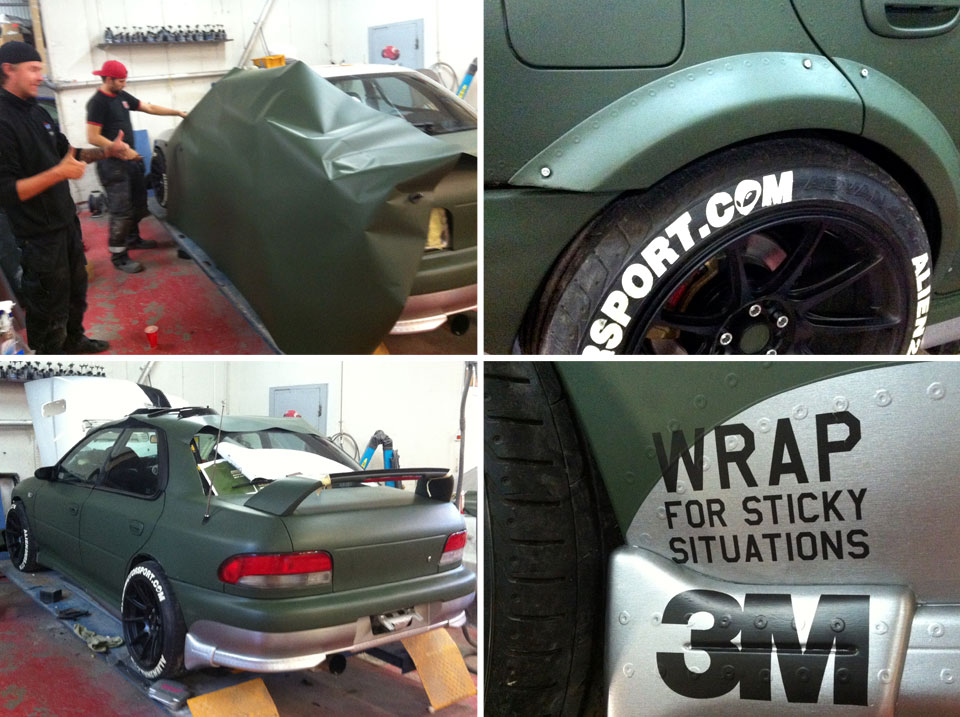 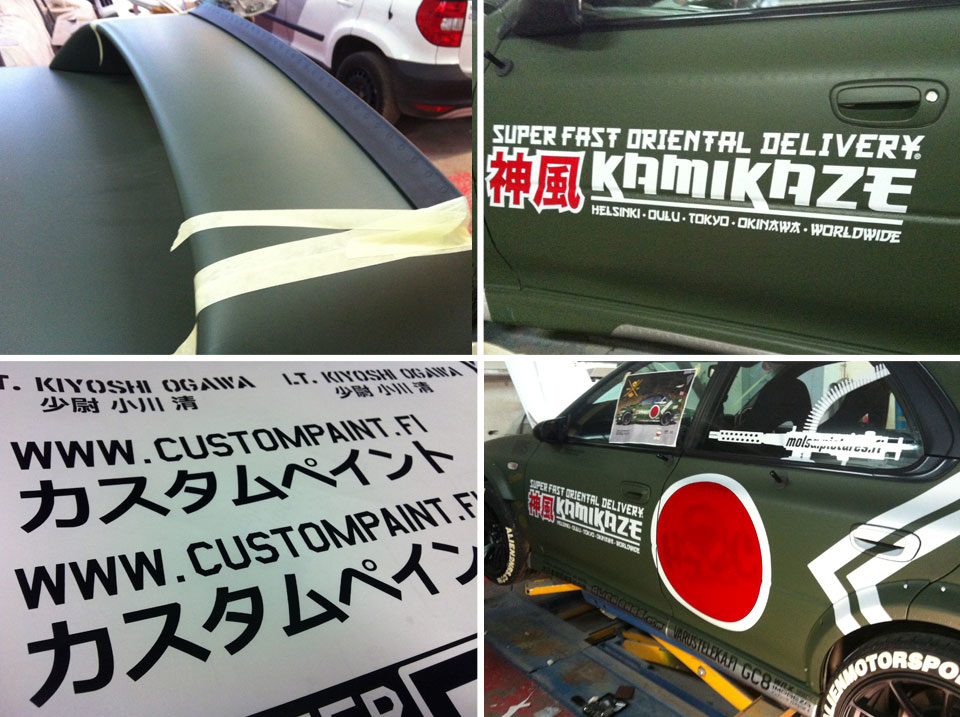 To hit the “full effect” we added real AK-47 magazines to the side marker holes and MK23 silencer’s to the intercooler intake scoop. Spread a ton of empty ammo shells around and you have pretty serious situation going on 🙂 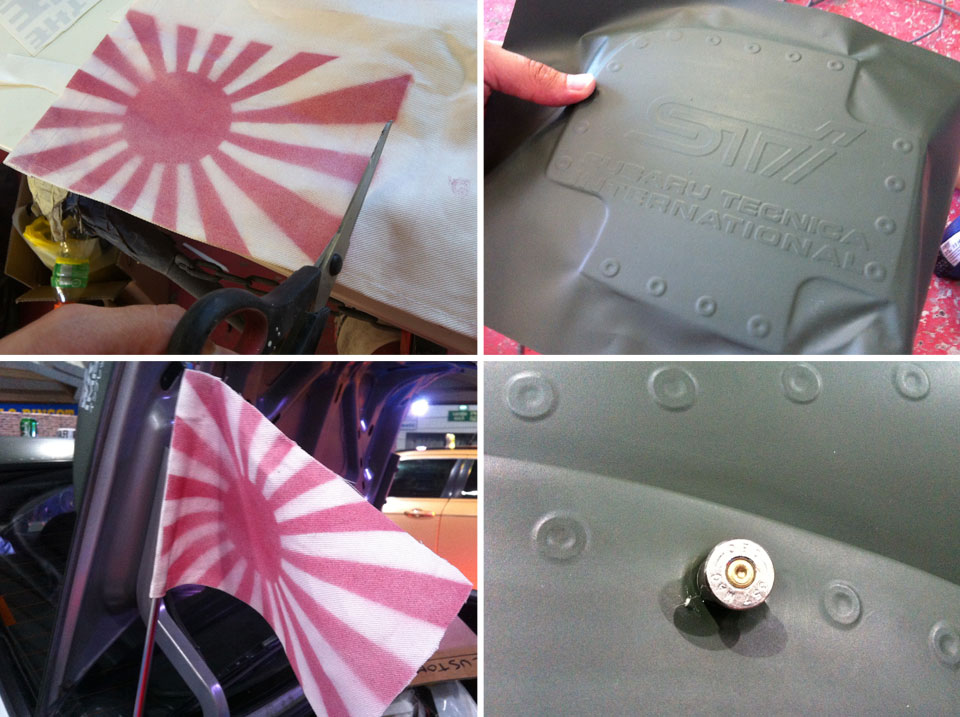 I made a little Japanese war flag for the antenna. Mr. Rasse helped us by lathe milling the Inconel 357 shells to decorate the Hex-Allen bolts that hold the fenders in place. Little details, they’re everywhere…

The wrap is a mix of 3M’s matte military green and brushed aluminum (for the planes belly/tail side). The car has over 5000 rivets under that wrap to pop the “airplane panel” feel. All the little slogans have double meaning once looked closer. [first read: BIG IN JAPAN – read closer: we’re not so BIG IN JAPAN].

All the little symbols are true to Japanese WWII pilots markings, Navy anchor/wings, flower/wings and the Sakura aka Cherry Blossom -logo in front bumper, that has bigger meaning behind it. It’s a symbol that Japanese Kamikaze fighters carried – a flower that blossoms and drops its leafs, but the leafs never return… All the Kanji-letters can be tranlated to english or finnish and have true meaning, addresses, etc = Ton of work on the little details.

We also had few ammo cartridge cases full of Geisha-chocolate candy for kids. Throw in a few Japanese War flags and a tribute/info plate and you have stand for this fighter. The 300C Hemi had real 150 dollar bills all over the car… chi-ching! 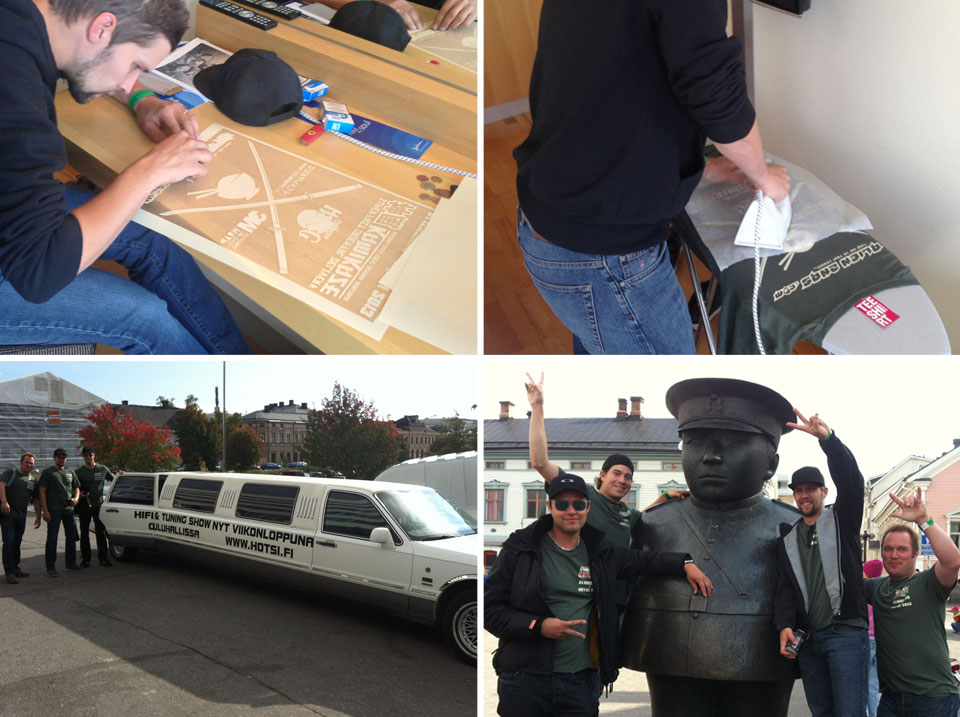 Overall the show and the trip was a success. We managed to drive to Oulu and back Helsinki with out any mishaps. It’s a 1200 km (745 mile) round trip. 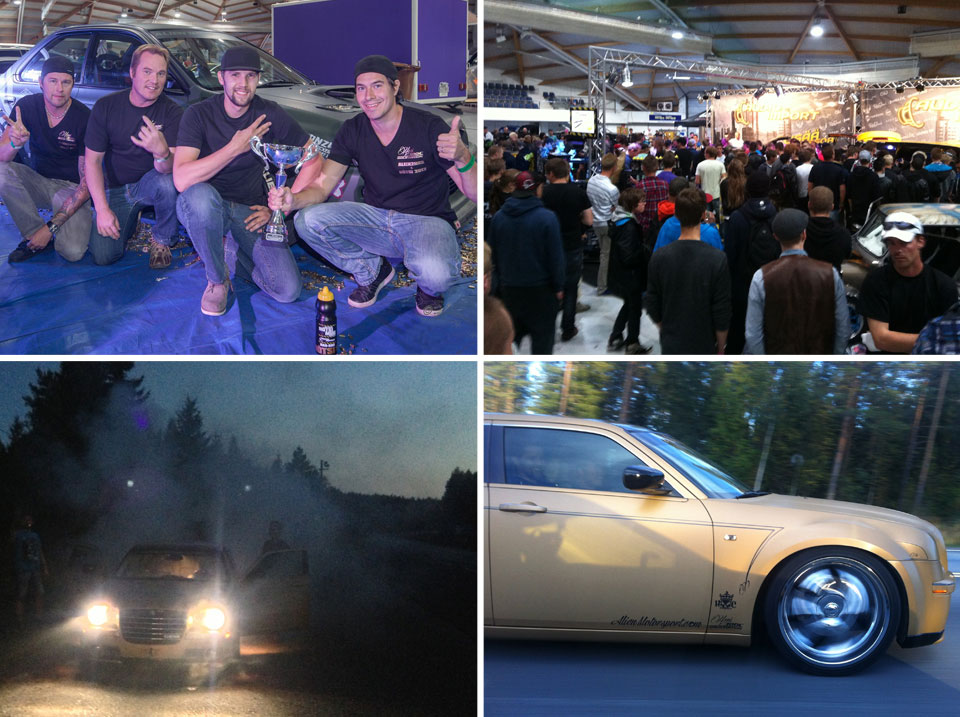 High-Res pictures of these two cars, can be found here: HTS13.